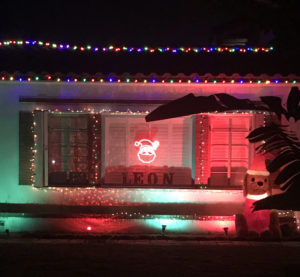 Francophiles will find it très bien to learn that today is St. Genevieve’s Day. Genevieve, sacred to Paris, that fair city’s patron saint, lived in Paris in the fifth century as a nun and is credited with saving the city from an attack by Attila and his Huns in 451. This she did through fasting and prayer, encouraging the residents of the city to join her. And around 475, she founded Saint-Denys de la Chapelle in Paris, which stands today as part of the Basilica of St. Denis.

I knew a Genevieve when I was a boy. She was an old friend of the family––a neighbor of my grandparents in the old neighborhood––and she was feisty and independent and she often wore a bandana on her head. Even in her old age, when I knew her, she would go up on the roof of her house in Fort Lauderdale and fix things that needed fixing. I like people like this. St. Genevieve strikes me as feisty and independent, too, and certainly someone who was not afraid to fix things that needed fixing, whether it be a leaky roof or dealing with invading Huns or getting a church built.

As the patron saint of the City of Light, I like to think of Genevieve as another of the midwinter saints who are light bearers at this dark time of year and who encourage us to be light bearers, too. She is often depicted holding a candle. As the story goes: the devil would time and again blow out her candle as she went to pray at night. Genevieve, however, relit her candle without need of flint or fire, always overcoming the darkness. (I picture her rolling her eyes each time, too.) As our wheel of the year goes, we are now thirteen days beyond the Midwinter Solstice; already light is increasing as we begin the journey toward summer’s warmth once more in the Northern Hemisphere. The light of St. Genevieve promises to never be snuffed by the darkness.

Seth and I saw the house in the photo on a walk through our Lake Worth neighborhood on New Year’s Eve. I took the four letters for what they are (Leon), but Seth is convinced the folks inside were trying to spell Noel. Either way, it seemed a fitting image to use. Joyeux Noël from us, and from Leon.