Be a Light Bearer 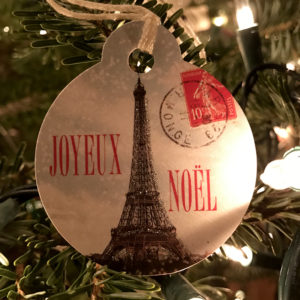 Francophiles, rejoice! While there are no particular customs (that I am aware of, anyway) associated with this Ninth Day of Christmas, it is St. Genevieve’s Day. Genevieve, sacred to Paris, that fair city’s patron saint. She lived in Paris in the fifth century as a nun and is credited with saving the city from an attack by Attila and his Huns in 451. This she did through fasting and prayer, encouraging the residents of the city to join her. And around 475, she founded Saint-Denys de la Chapelle in Paris, which stands today as part of the Basilica of St. Denis.

As the patron saint of the City of Light, I like to think of Genevieve in terms of her connection to light––as another of the midwinter saints who are light bearers at this dark time of year and who encourage us to be light bearers, too. She is often depicted holding a candle. As the story goes: the devil would time and again blow out her candle as she went to pray at night. Genevieve, however, relit her candle without need of flint or fire, always overcoming the darkness. As our wheel of the year goes, we are already thirteen days passed the Midwinter Solstice; already light is increasing as we begin the journey toward summer’s warmth once more in the Northern Hemisphere. The light of St. Genevieve promises to never be snuffed by the darkness.

There are plenty of you out there who love the food and culture of France. I think today, this Ninth Day of Christmas, is a fine day to enjoy those things fully. Joyeux Noël et bonne année!