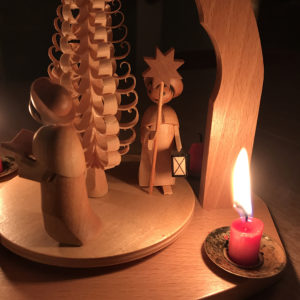 ELEVENTH DAY of CHRISTMAS:
Twelfth Night, Eve of the Epiphany

Twelfth Night used to be a really big deal, a celebration rivaling that of Christmas Day. Ever the champion of the underdog, I am here today to champion Twelfth Night, too. If you are inclined to feelings of melancholy or disappointment after Christmas Day has passed, these Twelve Days––and especially Twelfth Night and Epiphany, which provide a proper send-off to the season––are just what’s needed to help get you through that. For all we talk about maintaining links to the past, perhaps it is this, more than anything, that offers the best reason behind keeping an obscure old holiday like Twelfth Night in our contemporary world. Twelfth Night helps us feel more rounded, more complete. This is the value of Twelfth Night.

My family never did celebrate Twelfth Night when I was younger, but we did mark Epiphany. My mom calls it “Little Christmas.” I do remember one year feeling kind of down after Christmas Day had passed, and she told me, “It’s ok, we still have Little Christmas ahead.” Our little tabletop tinsel Christmas tree, the one she bought decades ago at Lord & Taylor and which we set up at our house now each year, meant a lot more to me after that. Maybe because the tree is little, just like Mom’s “Little Christmas.”

Years later, after my first internship at the Shaker Press, Brother Arnold Hadd and I exchanged so many letters. In one of those letters, that winter that followed my internship, he wrote about the Shakers’ Christmas celebration. It included things like “shaking the tree” (for presents, I think) and their tradition of a Swedish smörgåsbord (this, a tradition handed them by Brother Ted, who I never did meet), and yes, Twelfth Night. There is some confusion about when Twelfth Night actually falls, but I trust the Shakers on this. They celebrate on the evening of the this day, the Eleventh Day of Christmas. I think the confusion comes out of the way we reckon our days now as opposed to the way our ancestors reckoned theirs. Traditionally, the start of a new day begins at sundown. This is why so many evenings before holidays are so important. Think of Halloween (the Eve of All Hallows) or Christmas Eve. There is a scene in The Bishop’s Wife where Cary Grant’s character convinces Mildred, the bishop’s secretary, to leave work and let him take care of typing the bishop’s sermon. “It’s almost Christmas Eve,” he tells Mildred. “You must have shopping to do.” It’s the afternoon of the 24th when he tells her this. Even then, just 70 years ago when this film was made, there was a general understanding that Christmas Eve began once the sun went down and that was the ushering in of Christmas. As for Twelfth Night, the Shakers believe (as do I) that Twelfth Night ushers in the Twelfth Day of Christmas. As such, it begins with the setting sun on the 5th of January. Twelfth Night has, as well, another name: Eve of the Epiphany.

So the traditional English Twelfth Night was a fun filled party with, no doubt, lots of ale and cider and punch, lots of food, and music, dancing, and games. When I picture a Twelfth Night party in my head, it looks a lot like the party that Old Fezziwig throws for his employees in Charles Dickens’ A Christmas Carol. It is, alas, not much celebrated here in the States. Inspired by our Shaker friends, though, we’ve hosted a few Twelfth Night dinners in the past. That, I think, is a good start.

In Italy, la Befana will make her rounds tonight, and in Latin America, los Tres Reyes, the Three Kings, will be doing the same. All of them will be delivering gifts; they are the last of the Midwinter gift bearers. Their stories are intertwined. Epiphany––a celebration older even than Christmas itself––marks the day the Magi arrived after their long journey, following that star, to see the child born in a barn. They arrived with gifts for the child, and so it is no surprise that they are amongst our Midwinter gift bearers. In Italy, though, the legends get a little more interesting, wrapped up as they are with a kindly old witch. There, it is said that the Magi stopped at la Befana’s and asked her to join them on their journey. They found her sweeping her floor. “No, no,” she told them, “I’m too busy with my housework!” And so the Magi went on their way. But as she swept, la Befana grew remorseful that she had not gone with them, and so she stopped her sweeping, hopped on her broom, and left her home in search of the Magi and the child. But she never found them. Each year on the Eve of the Epiphany, she sets out on her journey again, in search of the child, delivering small presents to good boys and girls, and coal for the not so good ones.

I have known lots of Befanas in my day. It comes with the territory when you are of Italian descent. Women and men who clean and clean and clean, and who take great pride in their clean homes. Which is a wonderful thing, of course, but you know that they would’ve said no to the Magi, too, just like la Befana herself did at that first Christmas. Where does she even come from, la Befana? Well, she is an old hag… and so is the earthly goddess at Midwinter in the circular nature of the year: Born in springtime, fair maiden in summer, mother in autumn, old woman in winter. A cycle repeating with each orbit around the sun, the story told again and again.

Closer to home, it’s not been the happiest Christmas for us, after losing my dad in February. I’d say all of us in my family are all doing well, but we are all aware, too, that Dad is missing and there have been a few days this season where I’ve been plain sad and melancholy. There is another tradition for Twelfth Night, in which the Yuletide decorations are taken down. This, too, makes me a little melancholy. In case you haven’t noticed, I am a bit in love with Christmas. There is much about our celebration these days that is grating and irksome, but Seth and I, we do a very good job of keeping these things at bay, leaving to the best of our abilities only what is pure and essential. And so Christmas is in this little home a truly extraordinary time––a time outside ordinary time––and it does make us sad to see it go. Many years, and this may very well be one of them, we follow another, even older tradition: the idea that Christmas and Yuletide run all the way to Candlemas Eve, the First of February. This is an idea that is more aligned with the planet’s natural rhythm, for with Candlemas we reach the next cross-quarter day after the Midwinter Solstice. With it, the earth shifts toward spring, for winter is then beginning to wane: astronomically, we’ll be, at that point, halfway between the solstice and the spring equinox. Our ancestors enjoyed their Yuletide greenery all the way to Candlemas but not beyond… keeping it in the house any later than the First of February was an invitation for bad luck.

If you are celebrating Twelfth Night, or if you have memories of celebrating in days past, please tell us about it by leaving a comment below. I hope you are. It is our chance to send Old Father Christmas on his way in style. He deserves as much as that, no?

Image: Christmas pyramids from Germany’s Erzgebirge region can be quite elaborate, but ours is a simple one, featuring three carolers, one of them holding a traditional caroling star. Singing round the star was a common Twelfth Night practice though Northern Europe centuries ago. I hope it still is.