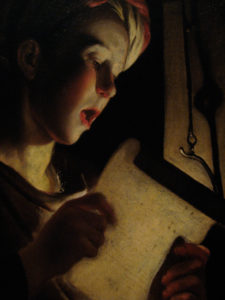 January is waning, and with it, so is Yuletide in its full breadth. Most of us have packed away the Christmas things long ago, but there is an old old tradition that keeps the season going until the First of February, which is Candlemas Eve. Here in our house we have subscribed to this tradition this year, mainly because our tree has been so lovely and fresh, still, even in this late hour of midwinter. Perhaps also because Haden the Convivio Shop Cat loves sleeping beneath its boughs, and we enjoy the serenity of watching her sleep there.

Candlemas traditionally marks the end of the Christmas season in the Church, and even in homes, it is on Candlemas Eve that all vestiges of the Yuletide celebration are to be removed, as we shift from one seasonal perspective (winter) to another: the first stirrings of spring.

If you can’t imagine living with plastic snowmen and sparkly ornaments so far into the new year, keep in mind that in earlier times (well into the 20th century), Christmas decorations consisted of things of the natural world: holly and ivy, balsam and mistletoe, rosemary and other greenery. And in times past the decorations went up on Christmas Eve, not earlier. So it was pretty easy to live with these festive things in your home through to the Eve of Candlemas, and they certainly brought as much joy to a home as any of our contemporary decorations do now. While the major festivities of Christmas ended with Epiphany, the spirit of the season remained and lingered and kept folks company for these forty wintry days. But it was considered bad luck to keep these things about the house any longer than Candlemas. Our old reliable 17th century Book of Days poet Robert Herrick describes the significance of the day in his poem “Ceremony Upon Candlemas Eve”:

Down with the rosemary, and so
Down with the bays and misletoe ;
Down with the holly, ivy, all,
Wherewith ye dress’d the Christmas Hall :
That so the superstitious find
No one least branch there left behind :
For look, how many leaves there be
Neglected, there (maids, trust to me)
So many goblins you shall see.

The shift in our celebration of Christmas will probably always perplex me. How we took a celebration that traditionally begins on the solstice and runs through Candlemas and made it into a fourth quarter corporate event that begins in stores in September and makes people weary of its presence by Christmas Day is, I think, a great disservice to us all. In our home we follow the old ways as closely as we can. We may seem out of step with the rest of the world, but the rest of the world is not necessarily where we want to be, anyway. Home is a refuge for us and for sacred ceremony, and we rather like it that way. And so with Candlemas we will say farewell to the tree and to the wreath of bay upon the door. We’ll pack up the ornaments, and the tree will be returned to nature, laid to rest in a quiet corner of the garden. Next winter, at the solstice, we’ll use that same tree, dried over the course of the year, to fuel our solstice fire. And with Candlemas, we’ll shift our view from one of winter to one where the renewal of spring is close at hand.

Image: “Le Jeune Chanteur” by Trophime Bigot, who is known also as the Candlelight Master. Oil on canvas, 1650 [Public domain] via Wikimedia Commons.