Back to the Workaday World 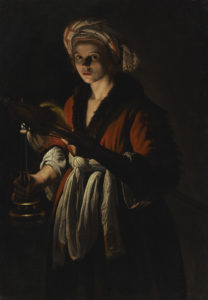 I know, and I’m sorry: You thought you were rid of me after all those Book of Days posts for the Twelve Days of Christmas. I thought you were, too, but then late last night I remembered about the Back-to-Work holidays that follow Yuletide. There are two of them, plus another day especially for printers. It would seem that our ancestors had a lot more fun getting back to work after the Christmas festivities, much more than we do, for getting back to the workaday world came not without a little celebration. We might do well with some of that, too.

St. Distaff’s Day
January 7
The day after Epiphany sent the women back to their spinning and the day became known as St. Distaff’s Day. It’s a bit odd in that there is no saint named Distaff. Rather, the day is named after a traditional tool for spinning wool or flax into thread. Prior to the spinning wheel, it was the distaff and spindle that facilitated this work. The distaff is a tool traditionally associated with women and with women’s work, and to be sure, spinning was so associated with women’s work that the word spinster, which is happily not much used these days, once was a recognized legal term in England to describe an unmarried woman, and the terms spear side and distaff side were also legal terms to distinguish the inheritances of male from female children. Any woman who spun thread (and that would have been most women in earlier times) would have known the distaff well.

Plough Monday
January 8
While the women always returned to their spinning on the Seventh of January, the men’s Back to Work day was a moveable one, falling on the Monday after Epiphany. This year, that happens to be the Eighth of January. There is a ceremonial ploughing of the ground on Plough Monday, which very often, in days of dirt roads, would be in the very road that ran through the village. The ploughs would be blessed and finely decorated, the men would parade in costume, there would be music and mummers and plays and a great hoopla of noise and all kinds of good sport. There would be a collection taken up door to door to pay for the tavern bill that came after; those who were too stingy to contribute risked having the path to their door ploughed, as well. Best, then, to contribute a few pennies to their sport.

As for the men’s costumes, the sillier, the better, and for sure there is a bit of the Feast of Fools, which we saw during the Twelve Days of Christmas, that comes into play on Plough Monday. It is traditional for one man in each Plough Monday gathering to dress as the Bessy, an old woman who we can link firmly to pagan goddess celebrations: she is the personification of the hag, the old woman of winter who, in the seasonal round of the year, will transform come spring into the virginal young goddess. And spring is not that far away in this world of spiraling circular tradition: Come February 2, we are halfway between Midwinter Solstice and Spring Equinox, a day marked by the holidays Candlemas, Imbolc, and Groundhog Day. It is a day seen in the traditional reckoning of time as spring’s first stirrings, even if winter still holds a strong grip. The sun is gaining strength by then, with considerably more daylight on the 2nd of February than there was on the 21st of December.

Copperman’s Day
January 8
The Monday after Epiphany is of special importance to printers like me, for it is also Copperman’s Day, an old Dutch printers’ holiday. The printshop apprentices would be given the day off so they could work on a project of their own and show off the skills they’d learnt from the master printers. Copperman’s Day prints were typically small keepsakes sold for a copper apiece.

Seth Thompson and I have been printing Copperman’s Day prints from handset metal and wood types here at our Lake Worth print shop since 2014. I already informed my boss at work that I’d be taking Monday off to print this year’s. What will it be? Ah, well, that is a secret for now. I’ll reveal that perhaps in the next Convivio Book of Days post, which, lucky for you and for me both, will not be tomorrow. We all get a much needed break from my yammering.  I’ll sign off now, and leave you with the poem “Saint Distaff’s Day, or the morrow after Twelfth Day” by Robert Herrick. It’s from his 1648 book Hesperides. It’s much better than anything I’ll ever write, and it goes like this:

Image: “A Young Woman Holding a Distaff Before a Lit Candle” by Adam de Coster. Oil on canvas, circa early 1600s [Public domain] via Wikimedia Commons.