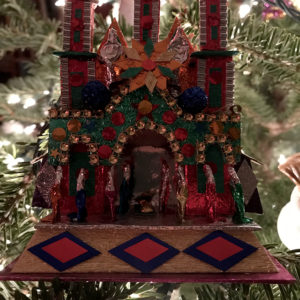 On this final day of the Christmas season, we come to a celebration that was recognized by the Church even before Christmas itself. It is the day tradition tells us the Magi reached the stable to visit the child after their journey following the star that guided them to Bethlehem. Seeing the child was their epiphany, and that is the name of this holyday/holiday, too: Epiphany.

In our home, we close the celebration of Christmas on Epiphany night with a simple ceremony at the front door, outside on the front porch. We will gather up all who are in attendance and we will each take turns writing with chalk on the lintel above the front door the numbers and letters and symbols of a traditional inscription. This year, it will read as follows: 20+C+M+B+18. These are the initials of each of the Three Kings (C for Caspar, M for Melchior, B for Balthasar), punctuated by crosses, blanketed on either side by the year. For me, the inscribing is always accompanied by a silent prayer that no one will be missing when we gather next to write the inscription again. Depending on the weather, the inscription may be there above the door for a month or it may be there all the year through. And though Christmas be gone, still the inscription reminds us of Christmas’s presence as we pass each day through that portal. The inscription is a magic charm of sorts, protecting the house and those who pass through that doorway, harboring the goodwill and spirit of Old Father Christmas.

And with that, these Twelve Days of Christmas are done. La Befana is back to her sweeping, sweeping Christmas away, too, and we return to ordinary time, back to the workaday world. Here’s a poem to help make that shift. It’s a song, actually, one I think of as a Christmas song, though there is nothing about it that specifically says it is… and so maybe it’s perfect for Epiphany and our subsequent return to ordinary time. And so I will leave you with that, ending our 12 day series with something to carry you off, off across the desert land.

And now as we sit on the steps
At the side of the square
There are three wise men sitting in their chairs
If anyone wants to know
Which way any of us should go
They will hold they will contain
They will cup the refrain
Hold It Steady – Take The Vision
Hold It Steady
Right ahead of you right between the eyes. THAT is how.

O it was a snowy night and our caravan
Moved along through this yet unholy land
You were there and I was there
Two desert boys – we did not understand
We only knew that something grand
Was happening – that Star – that night.

Thank you, Jane Siberry, for allowing me to publish “Caravan” for you here today. You can hear the song––the version from her 1995 record “Maria”––here… but it was also on her 1997 live album “Child,” and that’s the version from which the lyrics above are taken. Image: A Christmas Creche made of cardboard and foil by artisans in Poland, a gift to us from our friend Walter Chruscinski.